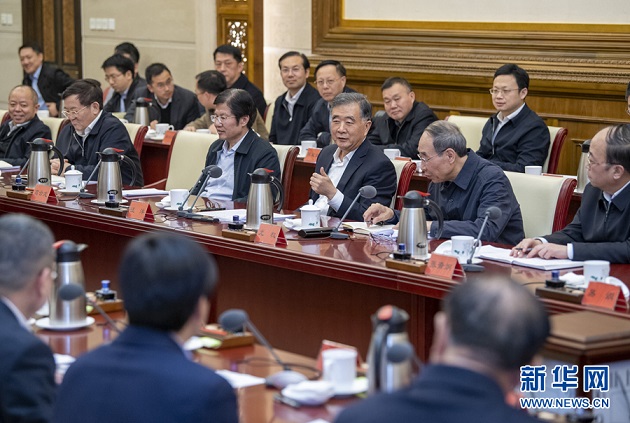 Wang Yang said that implementing new development philosophies and promoting quality growth were necessary for increasing China’s economic innovation and competitiveness, and fundamental to the sustainable growth of private enterprises. The more arduous the task, the greater the composure and determination required to overcome hardship and to succeed. As long as the political advantages of the Party’s leadership, the advantages of an ultra-large market, and the intrinsic advantages of the flexible private enterprise mechanism were brought into play, the nation would be able to resist risks, overcome hardships and start a new chapter.

Wang Yang stressed that the prerequisite to sound private economic growth was the sound growth of the people involved in the private economy. Private sector entrepreneurs should enhance self-learning, self-education and self-improvement, and firmly establish socialist ideals and beliefs with Chinese characteristics. They should focus on their core business, strengthen internally, carry out the new cordial and clean government-business relationship, and work hard at being model of patriotism and dedication to work, conducting business legally, entrepreneurship and innovation, and paying back to society. Entrepreneurs should be mindful of the origins of their wealth and use it to benefit others in the future. They should conscientiously carry out the “business in aid of villages” targeted poverty alleviation program, help eliminate poverty, and focus on building a moderately prosperous society for all. After the forum, Shen Guojun said that the Party central committee’s series of policies that encouraged, supported and guided private economic growth, particularly the Opinions on Creating a Better Development Environment and Supporting the Reform and Development of Private Enterprises issued recently, reassured entrepreneurs and stabilized growth forecasts. Private entrepreneurs have gained greater confidence and determination for development as a result.

“We should actively promote further sound growth according to the development direction prescribed in the policies by taking the initiative to reform and innovate, as well as transform and upgrade, and strive to contribute more to the country and our people.” Shen Guojun said that Yintai Group will conscientiously learn and implement the spirit of the forum, firmly establish socialist ideals and beliefs with Chinese characteristics, put the new development philosophies into practice, advance quality growth, focus on the Group’s core businesses, actively innovate and contribute to society.