NEWS
back
Yintai's Anti-coronavirus Stories | (On Our People ⑥)Tribute to those who run to care - composing a theme song for our joint anti-epidemic battle
Release Date：March 23,2020
Release Media：1293

On March 13th, the MV of the song Tribute to Running, which took 44 days from composition to production, and produced by a Yintai in77 team, went viral on many WeChat group chats upon release. 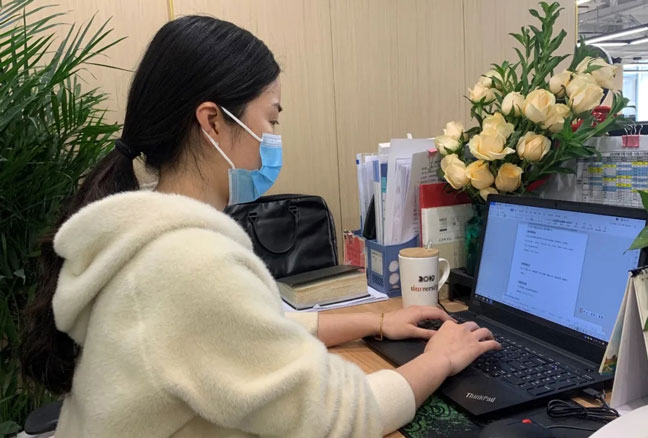 Yang Lijuan Cici, a Yintai in77 boutique project center VIC manager, was the lyricist of the song Run to Care, and was responsible for the overall planning of the MV production. Cici has always loved music and the arts. After the COVID-19 outbreak, she made her first attempt at writing lyrics independently. Her first attempt was adapting the song Courage, Courage, changing it to Courage Wuhan; singer Hou Tianyue was invited to sing it. On January 31st, they spent half a day to complete the entire adaptation and production process. Yintai in77 then released an excerpt of the song on its official WeChat account.

No one expected the song to be so well-received among in77 colleagues. The team’s person in charge even proposed to Cici that she should make a further attempt at writing a more original and participative piece. Cici didn’t rest after the discussion that night, and finished writing the lyrics well after 2am. With gratitude and dedication as the themes, Cici named this song Tribute to Running:

You run because of duty

In tears, you race against time

In the eyes of hope

You run because of your mission

Giving another second to those who save lives

In the freezing storm

You swear to run

To protect families around the clock?

“We would like to thank everyone for their dedication. Our deepest gratitude to all of you. This is what we truly want to convey.” All these were crystallized in the song and in the MV: On the empty streets of a city under quarantine, medical workers run to gain time, every second counts. Yintai’s staff are steadfastly guarding their frontline posts, sterilizing and preventing the epidemic in public areas ......

From creative planning, writing the lyrics and composing the music, arrangements and amendments, recording and production to shooting the video ...... Every participant was passionately and actively engaged in each part of the process because they knew that this was not merely a song. It was also the voice and gratitude of all Yintai people, a tribute to all the participants engaged in this battle against the epidemic.

“There’s an image of our security colleagues shouting go for it, China, which conveys the power to triumph, which I really like.” Cici said that the sentence “because of you” appeared numerous times implying that in77 will improve because of efforts of all parties concerned (translator’s note: “because” in Chinese is pronounced “yinwei”, and the song used “in wei”).

This too is the wish of all Yintai people: A tribute to those who run to care; thank you for your dedication. Thanks to you, the world is a better place.

(On Our People ⑤) Ensuring smooth operation is our duty?

(On Our People ②) “The epidemic is not yet over. We must remain vigilant”

(On Our People ①) “What’s most important is doing your job well.”

(On Caring for Others) Love@Together, hearts together

(On Prevention and Control) “It’s a matter of life and death. Yintai must be socially responsible!”