From the first day Yintai Group’s Qiandao Lake Intime City commenced operations, all a shopper has to do from the time he or she enters the shopping center to leaving the car park is to present a QR code, because all the discount coupons and the parking ticket are centralized without the shopper having to claim or exchange them in person.

As part of the “Light of Yintai” series, today’s story is about Wang Feng (alias) and his her team which created this information-based function.

In March 2019, Wang Feng was transferred from Intime Department Store to Qiandao Lake Intime City to assume the post of finance manager, but hesoon began his “inter-departmental” journey - while responsible for the work carried out at the finance department, he also took charge of the shopping center’s information department. The departments he headed played a critical role in making Qiandao Lake more digitalized and intelligent.

Unlike other Intime Cities which are integrated hotel-office-shopping center complexes, Qiandao Lake Intime City has geographical constraints, and is primarily engaged in commercial retail for the time being.

“Commercial retail is more dependent on the information system. Only by fully mastering store and foot traffic data can one competently and effectively manage operations, marketing and the shopping center,” said Wang Feng. 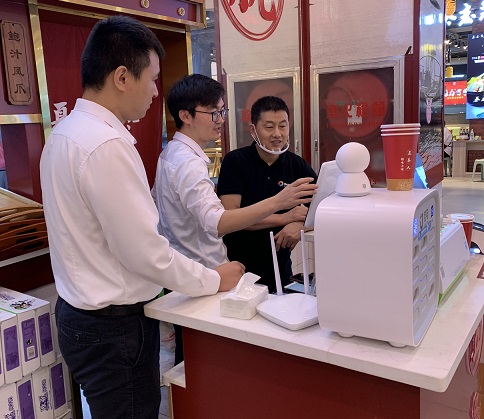 Coupled with the fact that the car park of Qiandao Lake Intime City is the only unmanned smart car park in the Qiandao Lake district, requirements for collecting and using information are all the more demanding.

By constructing the entire information system, Qiandao Lake Intime City has successfully connected a WeChat Mini Program to the shopping center’s membership system, which is in turn connected to the cashier system, and the latter, to the car park. “As far as customers are concerned, all they have to do is call up their membership number in the mini program, scan and pay, and the claiming of discount coupons and parking are all automatically reflected in their accounts.”

It was precisely thanks the unyielding drive and steadfast work of a young business management team such as this that Qiandao Lake Intime City was able to make progress on intelligentization and informatization.

“Chun’an, where Qiandao Lake Intime City is situated, is quite far from downtown Hangzhou. It didn’t have a shopping center initially. Given scarce professional resources, all of us in the information team were rookies in the process of advancing informatization. Learning and thinking are the new normal of the team, so is the joy of growth,” said the head of the Chun’an Qiandao Lake project.

In her mind, Yintai’s young and fashionable brand positioning is already deeply engraved in the hearts of the entire team. “We forge ahead and learn to innovate each day. That’s our new normal. Yintai triumphs in a new normal of innovation!”