Editor's note: CPPCC Daily recently interviewed Shen Guojun, CPPCC National Committee member, and Founder and Chairman of Yintai Group, on the topic of combating poverty and targeted poverty alleviation, and published an article entitled, Promoting rural revitalization is a mission and a responsibility. The following is the full text of the article. 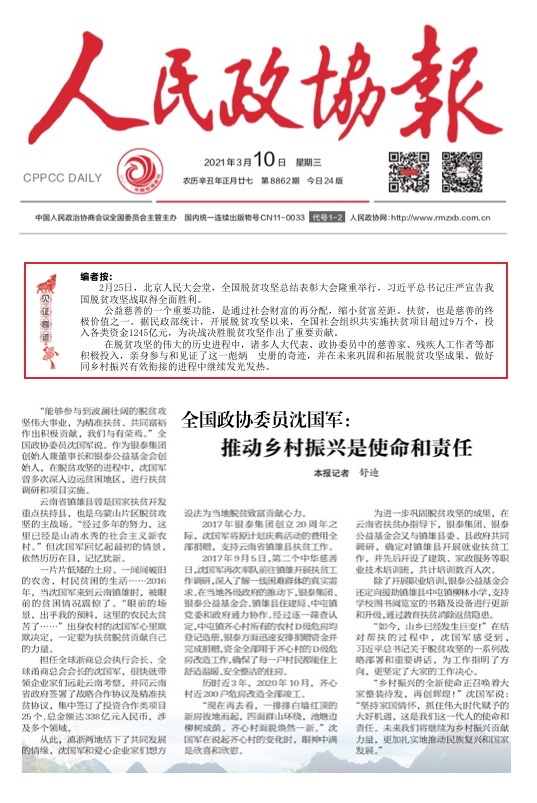 A key function of philanthropy is to narrow the wealth gap by redistributing wealth in society. Indeed, poverty alleviation is also an ultimate value of philanthropy. Ministry of Civil Affairs statistics revealed that since the anti-poverty campaign began, social organizations across the nation have carried out more than 90,000 poverty alleviation projects and committed various types of capital amounting to RMB124.5 billion, which have contributed significantly to the victory over absolute poverty.

In the great historic course of combating poverty, many NPC deputies as well as philanthropists and disability care providers among CPPCC members were actively engaged in the campaign, and personally participated in and witnessed this miracle. Going forward, they will continue to dedicate themselves to the process of consolidating and expanding the poverty alleviation achievements, and linking this effectively to rural revitalization.

Zhenxiong County in Yunnan Province was a key county supported by the State for poverty alleviation. It was also the main battleground for poverty alleviation in the region of Wumeng Mountain. “Years of hard work has made this a picturesque new socialist village.” But the scene Shen first encountered remained a vivid memory.

The clusters of low squat mud houses, dilapidated farm dwellings, the poverty stricken living condition of the villagers ...... When Shen visited Zhenxiong in 2016, he was shocked by the poverty he saw. “What I saw was worse than I had expected. The villagers were so poor ......” Shen, who grew up in village, then made a firm decision to contribute to poverty alleviation. 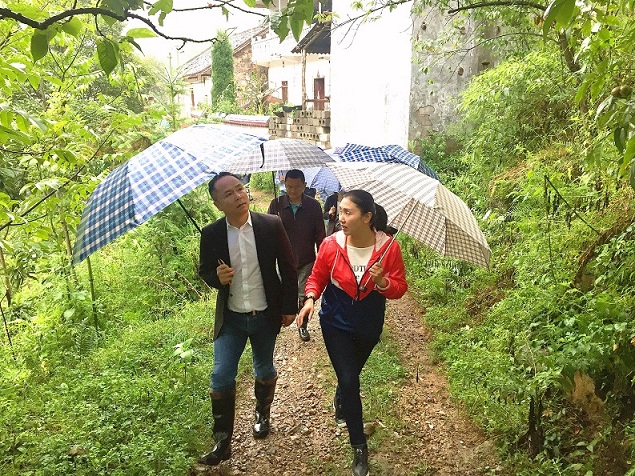 As Executive Chairman of the General Association of Zhejiang Entrepreneurs and President of the General Association of Ningbo Entrepreneurs, Shen quickly led a delegation of entrepreneurs to Yunnan for an inspection, and entered into a strategic partnership agreement as well as targeted poverty alleviation agreement with the Yunnan government. In total, 25 investment collaboration projects involving many sectors worth RMB33.8 billion were collectively signed.

From then on, Yunnan and Zhejiang formed a bond of joint development. Shen and the caring entrepreneurs spared no effort in their quest to help lift the locals out of poverty.

In 2017, on the 20th anniversary of the founding of Yintai Group, Shen donated all the money that would have been spent on the group’s original plan for a celebration to help the poverty alleviation work in Zhenxiong County.

On September 5, 2017, the second Charity Day of China, Shen again led a delegation to Zhenxiong to conduct a poverty alleviation survey to get a better understanding of the real needs of those living on the front lines of poverty. Thanks to the effort of all levels of the local government, Yintai Group, Yintai Foundation, Zhenxiong County Housing Construction Bureau, and the Party Committee of Zhongtunxiang worked together with the government. Upon screening, all Class D rural buildings deemed unfit for human habitation in Qixin Village, Zhongtunxiang were listed in a registry. Yintai quickly arranged for and completed an endowment fund of which all the proceeds were applied to reconstructing such Class D buildings to ensure that the villagers of each rural household would be able to live in a comfortable and warm as well as safe and neat home.

In October 2020, nearly three years hence, the reconstruction of close to 200 dilapidated homes in Qixin Village was completed.

“If you go take a look at them now, rows of new houses with white walls and red roofs stand next to shady willows by the pond surrounded by mountains. Qixin Village has acquired a brand new look.” Shen’s eyes glowed with joy and delight when he spoke about the change Qixin Village had undergone. To further consolidate poverty alleviation achievements, Yintai Group and Yintai Foundation worked together with the Party committee and local government of Zhenxiong County, under the guidance of the Poverty Alleviation and Development Leading Group Office of the People's Government of Yunnan Province, to conduct a joint survey, and determined that employment was a means of alleviating poverty in the County. Vocational training courses in construction and housekeeping services, among others, were conducted, and a few hundred persons attended these courses.

In addition to conducting vocational training, Yintai Foundation also provided direct help to Liulin Primary School in Zhongtunxiang, Zhenxiong County, and updated and upgraded the books and equipment in the school’s library and reading room, in the hope that education would eliminate concerns about falling back into poverty.

“Today, the mountain village has undergone enormous change!” In the poverty alleviation pairing process, Shen felt that the series of strategic arrangements and important speeches about poverty alleviation by President Xi Jinping had provided clear direction for this task, and strengthened the determination of all concerned with this campaign.

“The new mission of rural revitalization is calling us to stand ready for action and create another outstanding achievement!” Shen said, “Being patriotic and seizing the wonderful opportunities afforded by this great age is the mission and responsibility of our generation. Going forward, we will continue to contribute to rural revitalization, and work more solidly to promote national renaissance and growth.”